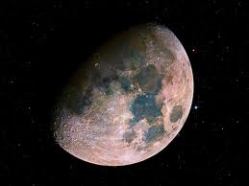 The chemical composition of the dust upon which the rocks sit is remarkably different from the rocks themselves. This indicates that the lunar surface may have been moved from somewhere else and placed on the Moon. Some of the Moon’s craters originated internally, yet there is no indication that the Moon was ever hot enough to produce volcanic eruptions. Hundreds of moonquakes are recorded each year that cannot be attributed to meteor strikes. Some of the quakes seem to follow a specific schedule.

2. Heavier Elements on Surface: Normal planetary composition results in heavier elements in the core and lighter materials at the surface; not so with the moon.

“The abundance of refractory elements like titanium in the surface areas is so pronounced that several geologists proposed the refractory compounds were brought to the moon’s surface in great quantity in some unknown way. They don’t know how, but that it was done cannot be questioned.”

3. Water Vapor: On March 7, 1971, lunar instruments placed by the astronauts recorded a vapor cloud of water passing across the surface of the moon. The cloud lasted 14 hours and covered an area of about 100 square miles.

4. Magnetic Rocks: Moon rocks were magnetized. This is odd because there is no magnetic field on the moon itself. This could not have originated from a “close call” with Earth—such an encounter would have ripped the moon apart.

5. No Volcanoes: Some of the moon’s craters originated internally, yet there is no indication that the moon was ever hot enough to produce volcanic eruptions.

6. Moon Mascons: Mascons, which are large, dense, circular masses lying twenty to forty miles beneath the centers of the moon’s maria,

“are broad, disk-shaped objects that could be possibly some kind of artificial construction. For huge circular disks are not likely to be beneath each huge maria, centered like bull’s-eyes in the middle of each, by coincidence or accident.”

It has been said I do not really fit a mould - that is probably true. Come and find me on youtube. Shiny Side Out (with Dave)